On this historic day, our correspondent Ken Fisher gives an account of The Iron Lady’s visit to Tenerife shores. – Ed

On 28th December 2002, Baroness Thatcher and her husband Denis paid a visit to the English Library in Puerto de la Cruz. The Thatchers were staying in Gran Hotel Bahia del Duque in the South and were in the hands of the Guardia Civil for any journey they made, although they had a Scotland Yard protection officer accompanying them. Due to my festive season arrangements, I was unable to attend. However, in the wake of her recent passing and in the light of the subject matter of my articles, I have pieced together details of the visit from a couple of members who were present that day.

Where better to start than with the man who was the British Consul here at the time, Mr David Ward. He had been detailed to escort the famous duo whilst in Puerto and so I contacted him by email. Here is his reply:-

In December 2002, only a few months after my arrival in Tenerife as British Consul, I was to have the privilege of arranging a day for Mrs Thatcher in Puerto de la Cruz. Now in the House of Lords, Lady Thatcher had asked to meet the British community whilst she was here on holiday. The English Library and the British Games Club responded enthusiastically to this proposal and laid on receptions for the benefit of their members.

The first engagement was the Library where the scheduled time for the visit ran over by an hour or so. Lady Thatcher (in constituency mode) and her husband Denis enthusiastically worked the rooms learning about the history of the Library and its ongoing important role in the life of the community. It was only with great reluctance that a transfer was effected to the nearby Games Club premises where an equally excited and warm welcome was extended to the couple. Denis insisted on finishing his G and T and his conversation with Michael Hindley-Maggs on aerospace matters before following in Lady Thatcher’s wake! However it was the ever thoughtful Denis who later caringly recognised the signs when it was time for them to leave. His death the following year was to be a great blow to Lady Thatcher and her family.

A framed photograph commemorating the visit and a signed book can still be seen in the Library to provide fond memories to members of the Thatcher’s only visit to Tenerife. 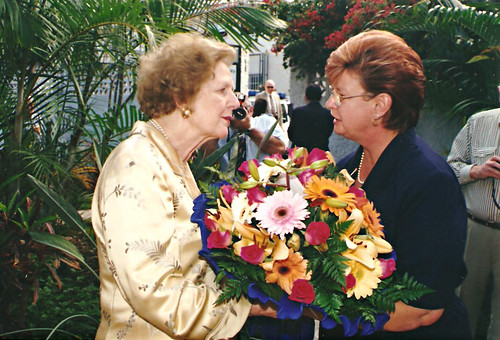 The lady seen presenting the bouquet to Mrs Thatcher, Mrs Jane Stewart certainly has fond memories of the visit. She tells me that there were about 150 members and friends present. A buffet was laid on for all but the Thatchers gracefully refused to partake. It was rumoured that they had stopped for lunch en route, maybe at the Hotel Botanico. If this is so, her bodyguards were not invited as they tucked in merrily while their charges fraternized with the members. As she left the Library to walk to the nearby British Club, Mrs Thatcher spotted a group of members on the lawn and strolled across to acknowledge them. They gave her an appreciative cheer. Jane agrees with Mr Ward – Mrs T knew how to work a room.

This may have been Mrs Thatcher’s first visit to Tenerife but she had been to the Canary Islands before. In 1967 she was part of a Parliamentary delegation consisting of 4 M.P.s who were having a short stay in Las Palmas before travelling on to The Gambia to present the Speaker’s Chair to their newly formed Parliament. This was a common practice to show friendship from the British Government to all members of the colonies on reaching independence.

William Lucas (the father of John Lucas owner of Sitio Litre Orchid Garden) was the manager of Maritima Medway SA based in Las Palmas. He was informed of the visit and instructed to look after the party during their stay at the Hotel Reina Isabel on Sunday 24th and Monday 25th September. William, in turn, passed this on to his young daughter Rosalyn who, judging by the letters received, carried out her duties to perfection.

On her return to London, Mrs Thatcher wrote on House of Commons paper the following:-

Thank you for a wonderful time on the island. You have both gone to a great deal of trouble on our behalf and we have thoroughly appreciated it. I had no idea that the islands were so beautiful and we were lucky to have perfect weather.

We shall all look forward to seeing you in London and returning your hospitality.

A note addressed to the House of Commons, London SW1 will soon find us.I know that Johnny is writing to you sending the ashtrays. I just wanted to say a special thank you as I have seldom had a happier time.

Note. – The ashtrays referred to were special House of Commons souvenirs, unavailable in shops.

William Lucas was an old hand when it came to entertaining ex- Prime Ministers. In 1959, when Winston Churchill visited the islands with Aristotle Onassis on the yacht Christina, Lucas was detailed to take care of arrangements. The letter he received later from Churchill’s Private Secretary was full of praise for his attention to detail. Eight years later, taking care of a future Prime Minister would have been a doddle.

Photos courtesy of The British Library