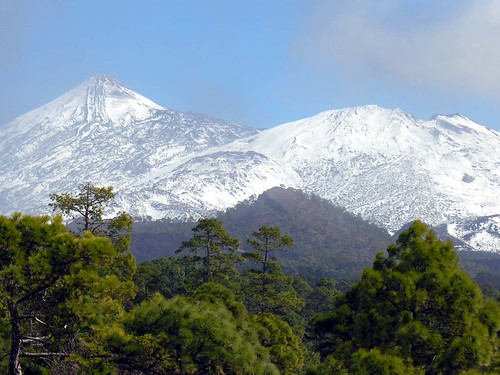 It was the ultimate stand off – religion versus nature. Would the power of prayer and faith be enough to hold off the progress of a lava flow?

Maybe nature just ran out of steam, but to the people of Chinyero it seemed like a miracle when the lava stopped short of El Calvario, Las Manchas in 1909, a “Miracle’ that has been celebrated ever since.

Smoke and fire in the west

On the west coast of Tenerife, preparations are in hand to mark the 100th anniversary of that last time when Teide roared. From the 18th to the 27th of November in 1909, this remote rural area was gripped by fear and uncertainty, starting when the alarm was raised in Icod de los Vinos at 4.40pm when smoke was seen rising from Teide. Later that evening, people in Santaigo del Teide reported rocks were spewing from Montaña de las Flores. The next day lava started flowing in the direction of Santiago del Teide, down the Barranco Los Ovejeros. 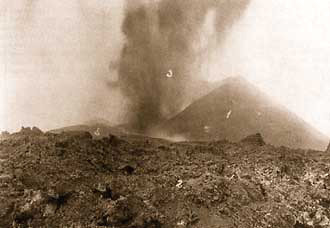 By the third day, learned scholars at La Laguna University just had to get a closer look, and a ramshackle convoy of 20 vehicles shipped 100 professors down to the natural observatory at Montaña Poleos to get an eyeful. There was plenty to see, a second eruption from a crater at Poniente bolstered the hot rampage of rocks.

As the days and the flow continued, people clung to their faith. A defiant procession was planned from Tamaimo to El Calvario, some 7 kms away. An image of Christ’s crucifiction, and statues of Santa Ana and the Virgin of the Peace led the way and were left in the path of the lava. Still it advanced – but only a few metres before finally stopping, and the rejoicing began.

A re-enactment of this procession will herald the start of the centenary, with a pilgrimage taking place on November 15 along the original route to a service of thanks near the spot where the stand-off took place. It’s a time to reflect and give thanks that no lives were lost, and a good moment to contemplate the turbulent nature of Tenerife. 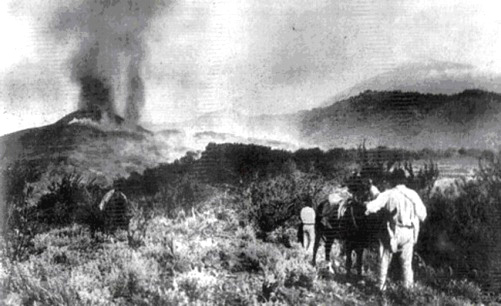 Councillors will use the anniversary to open a permanent memorial and exhibition at the 1665 historic rural house, Hotel Casa del Patio. The exhibition will be called Volcan de Chinyero, and the inauguration takes place on November 18, from Noon to 1.30pm. For those looking for somewhere a little more accessible, there’s an exhibition in Puerto de la Cruz from November 13 to December 17, at the former Convent of Santa Domingo. Here, the full history of the eruption will unfold in front of you with photos, artefacts and memories of 100 years ago.

From time to time there are rumours and scare stories of new volcanic activity. Some seven years ago it reached fever pitch after small earth movements and an increase in volcanic gas emissions. Some barfly ‘experts” could confidently tell you what date and time Teide would blow, and one clear afternoon, an elongated whispy cloud settled above the peak sparking a barrage of phone calls to emergency services. Last year a British tabloid decided Tenerife was overdue a new eruption, and cobbled together enough scientific theories to support screaming headlines, but it was little more than an amusing distraction for many living here. 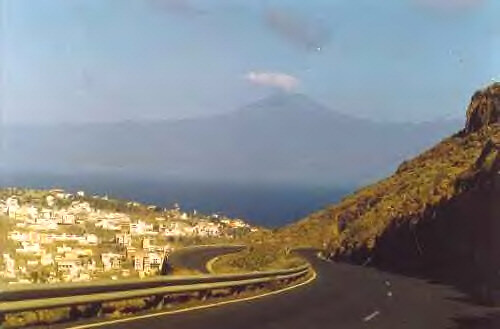 Ears to the ground

The potential for another eruption remains but things have moved on. Now Teide is prodded and probed on a regular basis for any signs of activity. The I.T.E.R centre in Granadilla, home to the wind turbines, is also the base for some of the top seismologists of our times. When they’re not Teide-watching, they’re sharing their knowledge at volcanic hot spots around the World. For now, all is quiet below the sometimes snow capped peak of Tenerife’s iconic mountain – but that won’t stop people from speculating.

Fashion Design in the Canaries